From Wikimedia Commons, the free media repository
Jump to navigation Jump to search
Translate this page
Other languages:

Screenshots are derivative works and as such subject to the copyright of the displayed content, may it be a video, television program, or a computer program.[1] Thus, screenshots must not be uploaded to Wikimedia Commons unless all content in them is under a free license or in the public domain.

If you do not own the copyright to a piece of software, you may publish a screenshot under a free license only if all the content shown itself has a free license. If a screenshot contains icons or content that is non-free, it is normally also not free,[2] but an exception can be made where the content is de minimis.

If all content shown is in the public domain, then the screenshot is also, because there is no creative contribution added when creating a screenshot. This may not be true in all jurisdictions, but holds at least in the U.S. (due to Bridgeman Art Library v. Corel Corp.), in Germany (see Bildrechte:Schutz für Reproduktionen in German Wikipedia), and probably all other countries of the European Union.

Screenshots from "Elephants Dream", and even the entire film itself can be uploaded here because it is a freely licensed work.

Screenshots from audiovisual works (such as films, television broadcasts, video clips) are often the property of its producer or creator and they may not be uploaded to Commons unless the work itself is in the public domain or released under a free license or unless the copyright holder is willing to release the screenshot under a free license.

In most cases, screenshots of computer software (which include programs, video games, operating systems) cannot be uploaded to Commons unless the software is released under a free software license that complies with the Commons licensing policy (software released under licenses that meet the OSI definition of "Open Source" will meet the requirements), or there is formal permission.

Note that free programs generally are not free of intellectual property protections. Just as websites may be free to access, but still covered under copyright, simply because a software is free to download, run or play, does not mean that it is in the public domain or freely licensed in a way that is compatible with Commons. For those that are under a free license, you must still conform to the terms of the particular licence, which usually means you must publish your derivative work under the same licence, and correctly attribute the original authors or owners. However, screenshots of programs with a command-line interface may fall into public domain. See {{PD-text}} for more information.

Note, this does not prevent you from uploading works created using non-free software, it is not subject to the copyright of the software itself in most cases. This is especially true for fonts, which in some cases are considered programs.

To create a free screenshot[edit]

Please tag screenshots that show only free content with {{Free screenshot}} in addition to an appropriate copyright tag. You must also indicate the free software license under which the program has been published.

In some cases the program itself is a work of art—an example would be a demoscene (such as one that is illustrated with the panda). Screenshots of such works are free if and only if the program itself is free. An exception to the rule is if the copyright holder of a non-free program wishes to freely license a screenshot of it. To do this, the user must have the rights to all visible non-free objects—the interface, the graphics, the text, everything. Before doing this, please consider all that it entails. Any design elements or logos appearing in the screenshot will irrevocably be placed under a free license. Also, be sure to make it explicitly clear that the software itself is not free.

Common proprietary web browsers include Internet Explorer, Safari, Opera and Microsoft Edge. Screenshots of these are never permissible on Commons if they show the browser's user interface. 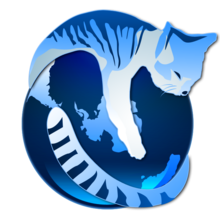 Common free web browsers include Mozilla Firefox, Chromium, Konqueror, and Web. Screenshots of these browsers displaying free content should be permissible, so long as they do not include copyrightable elements of a proprietary operating system, other proprietary software or non-free user interface customizations. The Firefox icon before Firefox 3.6 is non-free, so it must not be included in screenshots (internal logo files from Firefox 3.6 to 12 are under the Mozilla tri-license and from Firefox 13 are under Mozilla Public License 2.0, although trademarked, so are acceptable where hard to avoid). GNU IceCat, a rebranded Firefox-based browser, is unencumbered by this problem, but may show small non-free logos under certain configurations, which should be replaced.

Google Chrome has caused conflicts; even though, besides its logo, there are no immediately visible differences between Chrome and its open source arm Chromium, it has been asserted that Google Chrome itself is non-free because its official binaries are subject to a non-free Google Chrome Terms of Service which overrides the open source terms of its base source code. Deletion discussions have gone both ways.

Screenshots of web browsers displaying web sites, images, videos or other copyrighted content which is not under a free license are not permissible.

Although Wikipedia is often a component of free screenshots, there have been issues.

Although much of Android is open source software, this does not apply to Google software or their icons. Additionally, many smartphones do not include the "stock" Android user experience, but one specific to the company (such as Samsung Experience/One UI, previously TouchWiz and Huawei EMUI). These aspects are copyrighted by the maker of the phone, and screenshots showing portions of these interfaces (such as home screens) are not free.

Screenshots of "stock" Android can be tagged with {{Apache}} with copyright credit to "The Android Open Source Project".

As for the Apple iOS, per this failed undeletion request, the iOS software license agreement doesn't allow you to use {{APSL}} or other free licenses, hence unless if developers of a particular iOS app said to use their own free license (even so, you should cut the Apple-designed GUIs, i.e. drop-down list items, the "Home" buttons (either float or machinery)), they're violating our License policy.